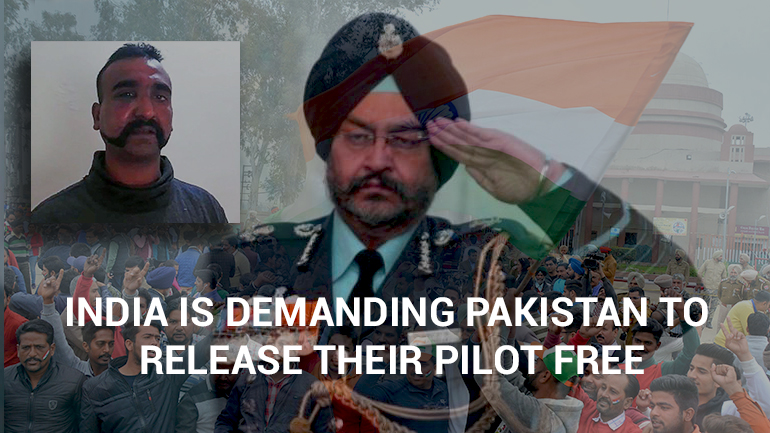 From last two weeks, the talk between Pakistan and India will now get worse than debates. As Indian claim of an airstrike in Pakistani territory after then Pakistani jet fighters shot down two Indian aircraft on Wednesday morning. Yesterday Pakistan’s information ministry shared a video in which a pilot has appeared with blindfold and blood was on his face. A Pakistani troop was asking him few questions regarding his army number, marital status, mission and his living place in India. Now, the Indian government demanded the Pakistani officials to release their pilot as soon as possible.

While on the other hand, Indian officials and people on social media said that sharing videos and pictures of the injured pilot from the Pakistani side is a vulgar and non-human act. Also, the users of social media from India described the captured pilot as their national hero. A large number of social network users is influencing both countries to stay calm and getting viral the hashtag #SayNoToWar.

The recent air strike across Line of Control (LOC), which divides Indian and Pakistani zone in Kashmir is the first once since after the war in 1971. It was the incident in which Pakistani jets shot down two Indian military aircraft, started stiffness among the two sides. Both the nations claim entire Kashmir but have control of only its parts.

The United States insisted both Pakistan and India solve their conflicts peacefully and try to avoid more military actions against each other and make efforts for de-escalating the strains among two sides.

What is going with Captured Indian Pilot?

Indian officials, as well as pilot himself, showed his identity as Wing Commander Abhinandan. Yesterday’s evening Officials also reported that their pilot was missing in the airstrike on Pakistan in the area of Kashmir. The videos and images of pilots during his capturing moments with Pakistani army troops become viral on social media networks condemned and appreciated at the same time from people across both nations. People condemned the pilot beating action of local residents, and they praised the Pakistani soldier’s act of rescuing pilot from residential anger.

Whereas, early in the morning today, Pakistani Prime Minister announces that they are going to release the Indian pilot tomorrow unconditionally. Pakistan’s PM said that they are peace wishers that why they are releasing Indian pilot who entered Pakistan for destruction purpose. Furthermore, he once again called the Indian Prime Minister Modi for the peaceful relations between the two countries. He stated that we are going to take a step towards peace, now its Indian turn to play their role for developing peace in the region.

Moreover, once again Pakistani military spokesperson Major General Asif Ghafoor said that Pakistani troops and the officials treated the Indian captured pilot according to the military morals and ethics. Furthermore, he also said that there is only one Indian pilot under the custody of Pakistan’s Army.

In the reaction of Pakistani Prime Minister Imran Khan Decision about releasing captured Indian pilot the Indian journalist Rajdeep Sardesai praised him in his tweet. He tweeted that people in India may not like his views. However, if we optimistically see this decision, Imran Khan won the day on the high moral ground. We have a solid case of terror against Pakistan. But unfortunately, our several political leaders are busy in calculating votes for the upcoming election.

On the other side, a senior Pakistani journalist Kamran Khan tweeted that Imran Khan scored that six from the front by releasing the Indian pilot quickly and unconditioned due to which Pakistan once again beat India in the global field. While addressing Indian Prime Minister Modi, he said that sorry Mr. Modi, you have to face because you deserve it.

While addressing the joint session of Parliament, opposition leader of parliament Mian Shahbaz Sharif said that today Pakistan is on the main point of history. Political leadership will have to work with collective insight and dedication in this delicate time. Opposition ensures the government that they will fully cooperate with the government by keeping all the differences on one side. The world will only listen to the voice of joint Pakistan and the joint parliament. No agreement will made on Kashmir issue.

Shahbaz Sharif said that Indian fighter jets cross the Pakistani boundary by violating the LOC and rapidly dropped the bombs. After which Pakistani Air fighters took immediate and effective action by drop down two planes of India remembering us the war of 1965. We tribute to the Army, Air Force officers and the soldiers on this action, which demonstrated by the bravery. It proved that the forces would protect Pakistan similarly they did before and did not deny to give any sacrifice. Sq. Leader Hassan Siddiqui becomes the nation’s hero what he did for Pakistan.

It is the first major conflict between Pakistan and India as correspondence point out since social media became conventional. Social media users all across the border of India and Pakistan are reacting optimist and pessimist at the same time.

After the suicide attack on Indian troops in Kashmir resulting killing of several soldiers, the users of social media in India got angry. They start blaming Pakistan for that. At the same time in Pakistan, some of the users express happiness on the Indian soldier’s loss while the majority say sorrow for their life loss. But after the Indian airstrike on Pakistani territory claiming to kill of 300 militants, Pakistani users start making fun of Indian claim and the Indian users start expressing pleasure on those airstrikes. Similarly, after the Indian jet fighters got shot down by Pakistani jets, the environment on social media once again get warmed.

Reactions of Public on Social Media

Pakistani social media users share their happiness on the incident, and the Indian users start blaming Pakistan as a terrorist activity. But after the Pakistani Prime Minister Imran Khan’s decision of releasing Indian pilot without any conditions for the eve of peace in the region. All the users of social media in both countries start praising the courageous decision of Imran Khan.