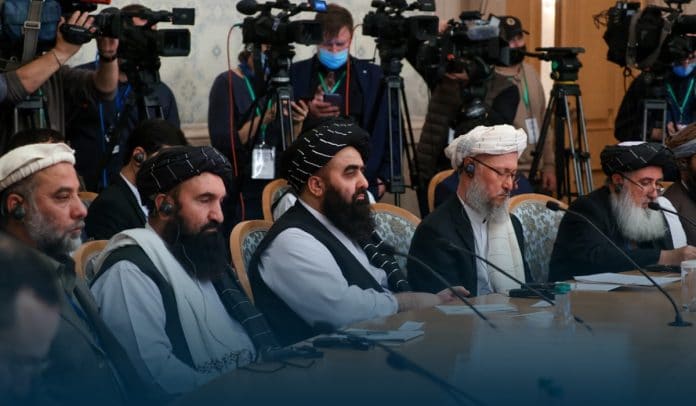 Moscow hosted high-profile Afghanistan talks on Wednesday involving senior Taliban representatives and neighboring states, a round of diplomacy that highlighted Russia’s influence in Central Asia. Russia has praised the efforts of Afghanistan’s new administration to improve the national security, peace, and political circumstances but emphasized the need for the Islamist group to certify inclusiveness in its governance to achieve a durable peace in the strife-torn nation.

Sergey Lavrov, Minister of Foreign Minister of the Russian Federation, opened the talks and emphasized that creating an inclusive administration entirely reflecting the interests of not only all ethnic groups but all the country’s political powers is necessary to achieve long-lasting peace in the Islamic Emirate of Afghanistan.

Moreover, Moscow had worked for several years to establish relations with the Afghan Taliban, even though it designated the terror group organization in 2003 and never took it off the list. Any relation with terror or similar groups is punishable under Russian Federation’s law, but the Russian Foreign Ministry has answered queries regarding the apparent contradiction by telling its exchanges with the armed group are crucial for stabilizing the war-torn country.

Lavrov said that a new government is in power in Afghanistan. Moscow notes the efforts they take to stabilize the armed forces and political condition and “set-up work for the state apparatus.” However, the Russian diplomat said that Moscow sees the formula for its adequate solution mostly in the creation of a genuinely inclusive administration, which should wholly reflect the interests of all, not only ethnic groups but also the country’s political powers.

“No Recognition for Now”

Unlike several other countries, Russia hasn’t evacuated its embassy in the Afghan capital Kabul, and its envoy has maintained regular connections with the Taliban since they gained control over Kabul on 15th August.

The talks came after Russia said Tuesday that China, Russia, and Pakistan are ready to assist the Islamic Emirate, which is currently experiencing a looming economic and humanitarian crisis.

Islamic Emirate’s new rulers won support from ten regional powers at high-profile talks in Moscow for the idea of a United Nations (U.N.) donor conference to aid the nation in preventing economic collapse and humanitarian disaster.

China, Russia, India, Pakistan, Iran, and formerly Soviet Central Asian countries Kyrgyzstan, Kazakhstan, Turkmenistan, and Tajikistan joined on Wednesday the Taliban in calling for the United Nations to call such a conference as early as possible to support rebuilding the nation.

Taliban quest for acquiring recognition and neighbour’s fear of instability – should in theory – mean relief & aid for suffering #Afghanshttps://t.co/ZPyjt9gkJS

While addressing the meeting, Abdul Salam Hanafi, Taliban Deputy PM, renewed a call for the international community to recognize the new administration in the Afghan capital and again asked America to unfreeze nearly 10 Bn dollars in “Da Afghanistan Bank” (Central Bank of Afghanistan) in foreign reserves.

Lavrov also told reporters that for now, the Taliban’s official recognition is not under discussion. Like many of the other essential nations in the region, they’re in contact with them. They’re poking them to complete the pledges they made while coming to power.

Read Also: China Pledged $31 Million Worth of Aid to Islamic Emirate of Afghanistan