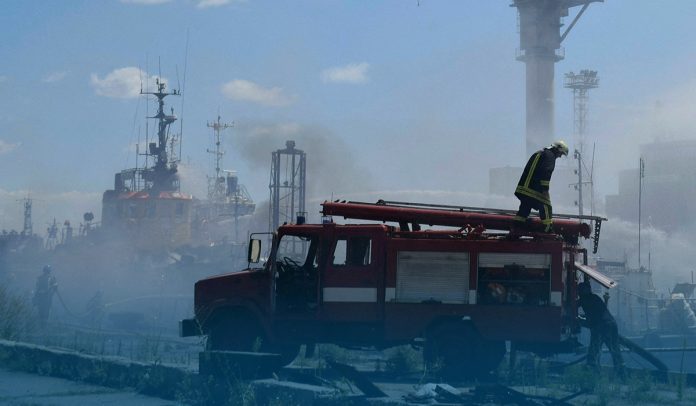 A spokesman for the Odessa military administration, Serhii Bratchuk, said Russian missiles struck the Odesa Commercial Sea Port on Saturday, just a day after Kyiv and Moscow reached an agreement that would permit the recommence of export of millions of tonnes of stuck Ukrainian grain through the Black Sea.

Sehrii Bratchuk said two 3M-54 Kalibr cruise missiles fired by Russians struck the Odessa port infrastructure, and two other missiles were destroyed by Ukraine’s air defense. According to the People’s Deputy of Ukraine, Oleksiy Honcharenko, six blasts were heard. Air raid sirens sounded at around 11:00 AM, with the sounds of explosions echoing across the important coastal trading city in Ukraine’s South.

According to official reports, the air strikes came just one day after Russian and Ukrainian ministers signed a deal, brokered by the Republic of Turkiye and the U.N., to resume exports of grain through Black Sea ports of the war-torn country intended to relieve the world hunger stimulated by the cruel Russian war.

Ukrainian journalist Danylo Mokryk said that Moscow signed a UN agreement permitting grain exports from three ports, including Odessa port, the largest Ukrainian seaport and one of the largest ports in the Black Sea basin. But Putin-led military struck the port with Kalibr missiles. That is all the world needs to know regarding accord with the Kremlin.

On the other hand, Volodymyr Zelenskyy, the President of Ukraine, said that the air strike on the Port of Odessa ruined the feasibility and likelihood of negotiations with Moscow. In addition, according to an economic adviser to Mr. Zelenskyy, Oleh Ustenko, the war-torn country in East Europe, has the potential to export sixty million tons of grain in around nine months if its seaports were opened, but Moscow’s attack on Odessa Seaport signaled it would definitely be challenging.

Ustenko said that Kyiv could make ten billion dollars by exporting 20M tons of its silos grain and 40M tons from its fresh harvest. And out of the total 60M tons harvest, 20M tons are for domestic use.