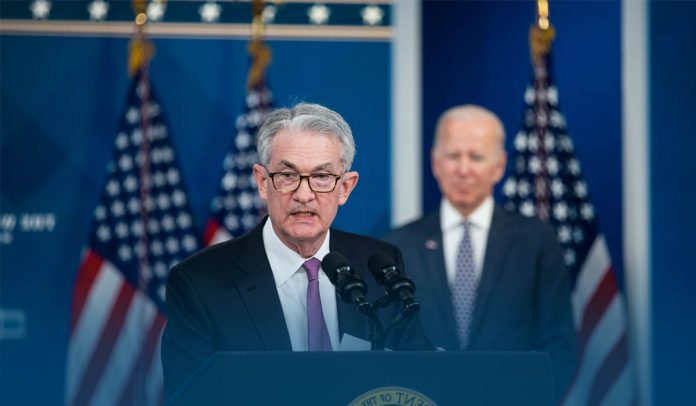 On Monday, the United States President Joe Biden announced he reappointed Jerome Powell for the second term as Federal Reserve Chairman of the U.S. central bank, selecting for continuity in the most powerful economic post as the threat of mounting inflation looms in an election year. Republican Powell, 68, is a Trump appointee and expected to win Senate confirmation with bipartisan support.

Biden said that Powell played a crucial role in helping the country recover from the worst economic decline amid the COVID-19 pandemic. The president’s reappointment of Powell to one of the most critical world economic positions ends weeks of speculation in the Washington political crisis and financial markets. Furthermore, some progressive Democratic leaders in Congress had pushed the president to name Fed Governor Lael Brainard to lead the Federal Reserve, but Biden instead called her vice-chair.

The decision of the president to tap Republican Jerome Powell, former private equity executive, to another four-year term is a rare case in which he reappoints a major official first appointed by the former Republican President Donald Trump. According to Biden, he named a Republican leader instead of a Democratic leader because the country needs independence and stability at the Fed. He also said that Powell has extensive bipartisan support in a politically divided nation.

Biden called Powell the right man to see the country through the recovery from the damage of the coronavirus pandemic and the fastest-growing consumer prices in the country in thirty-three years – a 6.2 percent yearly increase in October. Moreover, investors mostly welcomed the Powel reappointment favorably, with two of the three key American stock indexes – the Dow Jones average of thirty key stocks and the broader S&P 500 – above dramatically throughout trading on Monday. But the technology-heavy Nasdaq index plunged.

In Washington, Powell expected to win Senate confirmation with bipartisan backing again. Out of the eight-four senators who voted for him four years ago, sixty-eight of them are still in office, equally split between Republicans and Democrats. One Powell adversary, Senator Elizabeth Warren of Massachusetts from the Democratic party, said she would vote against his reappointment. At the same time, Warren expressed her support for the nomination of Brainard. She cited what she says are failures of Powell on climate, regulation, and ethics.

Powell was first named to the seven-member policy-making board of the Fed ten years ago by then-Democratic President Barack Obama, another Democrat, before being elevated to Fed chair by former president Trump. In addition, Biden has three other forthcoming or current vacancies to fill on the Fed board, which essentially sets the world’s largest economic policy for the U.S. President Biden said the United States made remarkable development over the last ten months in getting Americans back to the work and gearing-up country’s economy again and praised the performance of Brainard and Powell.

Why did Biden Pick a Republican for the position?

Biden said that he picks Republican instead of Democrat because of gigantic uncertainty and enormous potential for the country’s economy; the government needs stability at the Federal Reserve. Powell’s term as chairman will end in February of 2022. Still, American presidents usually pick their federal bank chiefs in advance because they want to give plenty of time to markets to absorb the news and new appointment. Their intention also aims to allow enough space for the confirmation proceedings to play out in the Senate. On the news, stocks instantly jumped once markets opened.

Sherrod Brown, the Senate Banking Chair, and Pat Toomey, the panel’s key Republican, each supported Powell’s reappointment, though the two persons come from opposite ideologies. Brown said that Powell led the U.S. economy through a historic fatal coronavirus pandemic, and under Joe Biden’s leadership, the unemployment ratio fell countrywide. Further, he adds that he looks forward to working with Chair Powell to stand up for workers and stand up to Wall Street to share in the success they create.

Powell will be dealing with crucial policy questions following the decision of the Fed to start retracting some of the exceptional support it initiated for the economy when the outbreak began. Surging energy and food prices coupled with increasing stocks and home values sparked fears about inflation. Powell will face pressure from fellow Federal Reserve officials, some of whom believe the federal bank should more violently strive to choke off fast-tracking inflammation. In addition, there are three other vacancies at the U.S. central bank, such as the Fed’s point person on bank regulations, vice-chair of supervision, as well as two other seats.

In 2020, unemployment reached its lowest level in the U.S. since the 1960s, the COVID-19 pandemic struck, leading the central bank to pump trillions of dollars into debt markets to turn back a massive credit freeze. Additionally, the efforts dropped borrowing prices across the board. However, some Democratic leaders described the execution of the emergency programs of the Fed for states, businesses, and cities for enriching investors beyond ordinary Americans.

The Fed took some steps on climate change. Last year, the central bank officially called the climate issue a threat to the financial system’s stability. Now it joined a global network of central banks to approach the problem and establish two internal committees on the matter. However, some activists say the Fed is not going fast enough, and they also urge the central bank to slow the flow of currency to the fossil fuel industry.