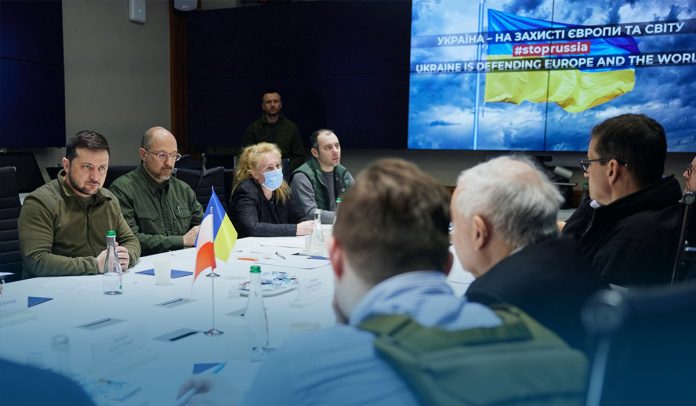 According to the White House Press Secretary, Joe Biden, the U.S. President, will visit Europe in the following week to hold a meeting with world leaders and discuss Russia’s all-out incursion of Ukraine. Biden will travel to Brussels to join a NATO Summit on 24th March and will also participate in a European Council meeting, Jen Psaki told media in the White House conference.

On Wednesday, Volodymyr Zelenskyy, the President of Ukraine, said that peace discussions were sounding more realistic, but additional time was required, as Russian air attacks killed 5 people in Kyiv, the capital of Ukraine, and the refugee number amid Kremlin’s aggression touched 3M.

As the latest round of talks between Ukraine & Russia are set to resume today, Ukrainian President Zelenskyy has said that peace talks with Russia are beginning to sound more realistic, but more time is needed to reach a breakthrough. Srinjpy Chowdhury with more details #Ukraine pic.twitter.com/wifeegOyKo

Ukrainian authorities have raised expectations the conflict could end sooner than anticipated, likely by May, 2022, saying Russia might be coming to terms with its disappointment to impose a new administration on Kyiv by force and running out of new personnel.

Before the next round of discussion, Zelenskyy said Wednesday that the negotiations continue, and he’s notified, the positions during the talks already sound more practical. But time is still necessary for the results to be in Ukraine’s interests. In the inkling of likely compromise, the Ukrainian leader said formerly that the post-Soviet state was set to accept security assurances from Europe that couldn’t reach its long-term aim of becoming a NATO member.

Russia sees any future Kyiv NATO membership as a threat and has asked for assurances it would never join the Western Alliance. Furthermore, Dmitry Peskov, the Kremlin’s spokesperson, said it was premature to foresee development in the discussions. However, the work is tough, and in the current circumstances, the very true that the negotiations are continuing is possibly positive.

Moscow calls its unprovoked attack a ‘special operation’ to ‘deNazify and disarm’ Ukraine. Kyiv and European allies call this an unsupported pretext for a ‘war of choice’ that has raised concerns of extensive fight in the West.

American leader will make his first trip to the West since Moscow attacked its neighbor to discuss the catastrophe with NATO allies in the following week, according to the White House. He’ll also attend an ‘extraordinary NATO Leaders Summit’ at Brussels, Belgium – NATO headquarters – on March 24.

The President of America told reporters late Tuesday that Russia’s violence against the former Soviet republic has joined people all across the U.S. The government is likely to proclaim more aid moves on Wednesday following the Ukrainian leader’s address to the U.S. Congressional members. He said it is extraordinarily tough to get supplies into the embattled country while Russian military assault continues.

On 13th March, Russian military forces launched missiles and struck a military training facility near to the border with Poland – a NATO ally, purportedly killing 35 people and wounding 134. The facility has held joint military exercises with NATO and other European Armed Forces.