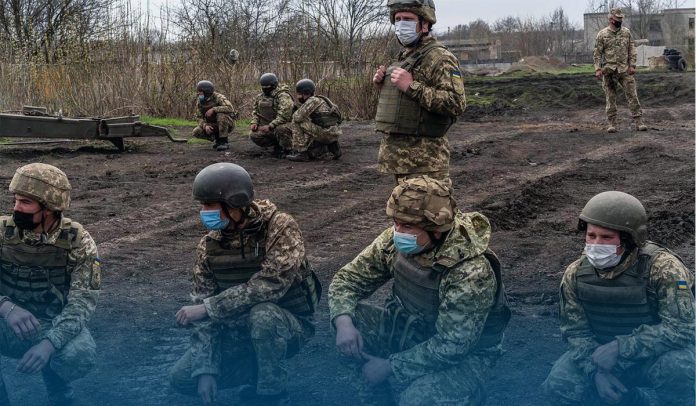 On Tuesday, Joe Biden, the U.S. President, said that America and its NATO partners are stepping up pressure on Russia, the same day that Kremlin officials declared the Eastern Ukraine offensive in the two Donbass provinces in Ukraine – Donetsk Oblast and Luhansk Oblast. On the other hand, Russian increased assaults and bombardment on the Donbass line of control, but Ukrainian military forces managed to resist multiple attempted advances by Moscow troops, according to a British military update.

When asked about his morning phone-call with the leaders of France, the United Kingdom, Germany, the European Commission, Canada, Italy, Poland, Japan, and the North Atlantic Alliance, President Biden said Tuesday he knows the media is always asking him, why he’s always on the call speaking with world leaders making efforts to keep them organized. He continued that one of the things he did is, he went on and got an agreement from numerous other leaders to release petroleum from their strategic oil reserves.

This morning, I met with Allies and partners to discuss our support for Ukraine in the face of Russian aggression. We are committed to continuing our assistance and to imposing severe economic costs on Russia — and we reaffirmed our solidarity with the Ukrainian people. pic.twitter.com/nOeUC28vsG

In addition, Jen Psaki, the White House spokeswoman, said that Joe Biden and allied leaders also conversed about giving more humanitarian, economic, and military support to Ukrainian forces. Briefing the media, Psaki also said that Biden and the Allies also debated efforts to hold Putin and Russia answerable for its brutal incursion of its neighboring country.

US Readying Another $800M Military Package for Ukraine

British PM Boris Johnson has said that the U.K. will provide additional heavy military ranged weapons to Kyiv as the war with the Putin-led military moves into a new phase. Olaf Scholz, the Chancellor of Germany, has said that Vladimir Putin, the President of Russia, is accountable for ‘war crimes’ in Kyiv that have already taken the lives of thousands of civilians.

According to three senior American officials and two persons having knowledge of the matter, the United States is readying additional security and military aid package worth 800M dollars for Ukrainian forces. The specifics of the new military support package are still being discussed and could modify, but earlier on April 19, the American President said the United States planned to transport more weapons to Kyiv.

Security Package Size Could be Changed

One of the US government officials said that the US administration is working on getting the security aid to Kyiv as early as possible because they believe the brutal war is in a critical stage, and the sustained American military support could make a difference when Moscow’s more violent attack on Eastern part of the country intensifies.

And if authorized, the newest security package of 800M dollars would mean the United States of America has committed nearly 3.4 Bn dollars in support to Zelenskyy’s Ukraine since the Kremlin’s all-out incursion started on 24th February.