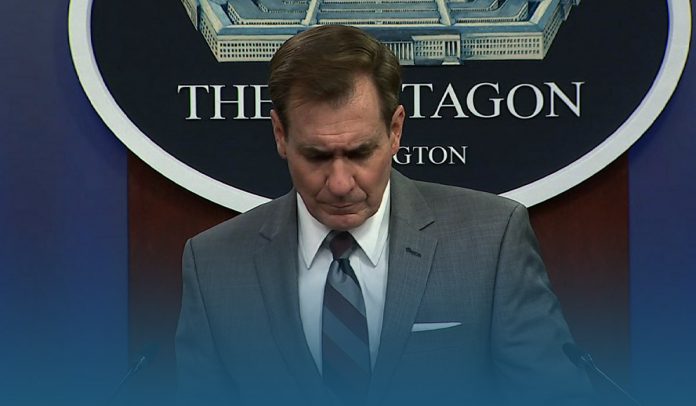 The Defense Department defended on Friday its strike the night before against what officials say was an Iranian-backed militia position in Syria, despite international criticism and growing skepticism in the U.S. Congress about its legality.

John Kirby, the Pentagon spokesman, said in a briefing on Friday that they’re confident these were legitimate targets utilized by groups associated with these recent attacks. The attacks sent an ‘unambiguous message’ that they will defend themselves, protecting their interests. Moreover, they are certainly going to act to protect their people.

Kirby said that it was very much a defensive operation and as well as to send a strong indicator about their resolve. Even so, the U.S. attacks prompted debate among American policymakers over the first overt use of military force under a sitting U.S. President.

The attacking response came after a series of rocket strikes in recent days on U.S. targets in Iraq, including one that killed a contractor working with the U.S.-led coalition in the state.

According to the London-based Syrian Observatory for Human Rights, at least 22 Iraqi militiamen allied with Iran were killed, which gather information from a network of activists on the ground in Syria. Moreover, three ammunition trucks also destroyed in the strike.

The Syrian foreign ministry stated that the airstrike sent a ‘negative signal about the new U.S. government’s policy and that such strikes could escalate tensions in the region.

Sen. James Inhofe of Oklahoma, the top Republican on the Senate Armed Services Committee, stated Friday that the strikes were the correct and proportionate response to protect American lives. He looks forward to more information on the government’s response to Iran’s aggression. Republicans echoed his approval.

However, some Democrats voiced in opposition to the intelligence report and wanted more details. Rep. Ro Khanna of California stated that this attack makes President Joe Biden the 7th consecutive American president to order attacks in the Middle East. Moreover, there is absolutely no justification for a president to authorize a military attack that isn’t in self-defense against an imminent threat without the authorization of U.S. Congress.

Sen. Tim Kaine of Virginia said in a statement that the U.S. people deserve to hear the government’s justification for these attacks and its legal explanation for acting without coming to U.S. Congress.

House Rules Committee Chairman Jim McGovern of Massachusetts said that he gets nervous anytime they bomb anyone. Moreover, he hopes it does not escalate.

White House Press Secretary Jen Psaki said the U.S. Defense Department briefed congressional leaders before the strikes. She said that government officials have been informing individual legislators and their staff and will hold a ‘full classified briefing next week at the latest.’

According to a National Security Council (NSC) aide who commented on anonymity condition, Mr. Biden acted under his constitutional authority to defend United States personnel and deter the risk of additional attacks.

Kirby said, to target a waypoint for militia groups (Kataeb Hezbollah and Kataeb Sayyid Al-Shuhada), that America claims are backed by Iran, two F-15E Strike Eagles dropped 7 precision-guided munitions (PGM, smart weapon) on a ‘terrorist entry control point’ at Abu Kamal on the Syrian side of the Iraqi border. The airstrike destroyed 9 buildings and damaged two others.

An American defense official told CNN that the American military’s original plan was to strike two locations near the Al Bukamal, but at the last minute, authorities scratched the second site due to the possibility of civilian presence.

The escalation of violence on US targets in Iraq

After a decade of civil war, Syria’s military is not in a strong position to respond directly to an American attack. The state faced two strikes by the United States military during former President Trump’s tenure, both over President Bashar al-Assad’s use of chemical weapons in the conflict.

America avoids raising tensions that would come with a direct strike on Iran by hitting a facility in Syria, which the Biden’s government is seeking to persuade to return to the 2015 nuclear agreement Trump abandoned in May 2018. It also avoids American strikes inside Iraq, which would have caused embarrassment for the fragile United States-allied government in Baghdad.

In a statement, the White House said Wednesday that the United States launched the strike just one day after Joe Biden spoke with Iraqi PM Mustafa Al-Kadhimiy. Both leaders discussed the recent rocket attacks against Iraqi and coalition personnel and agreed that those accountable for such attacks must be held entirely to account.