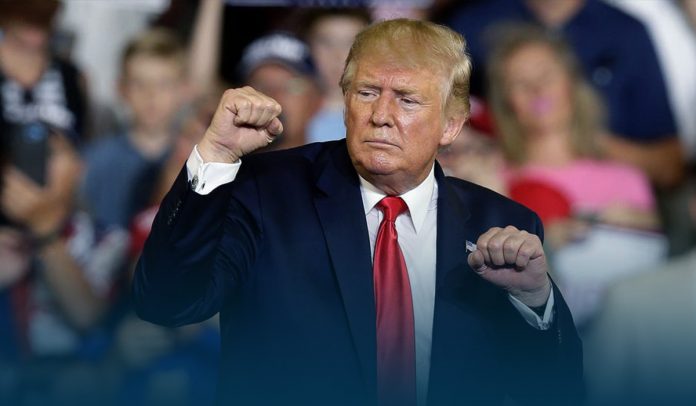 Donald Trump, the President of the United States, decided to hold a presidential reelection campaign rally in New Hampshire on Saturday. Trump continues his efforts to carry on in-person events amid the COVID-19 outbreak.

President Donald Trump plans to hold a campaign rally in New Hampshire on Saturday as he continues his push for in-person events amid the coronavirus pandemic. https://t.co/TT5wUA8UDR #Daybreak8

The president’s campaign said in a press release that the rally scheduled to occur at 08:00 p.m. ET at the Portsmouth International Airport. There will be enough access to face masks and hand sanitizers to all attendees of the event.

A campaign source tells CNN that they organize the event at airplane hanger at the Portsmouth International Airport. The source continues that they will allow some attendees inside the hanger, and in case of more crowds, they will shift it towards the tarmac outdoors.

New Hampshire is among one of some states if the United States that are reporting a decline in the COVID-19 cases. According to the statistics from Johns Hopkins University, COVID-19 cases are on the rise in thirty-four states during the last week, with twelve recordings an escalation of over fifty-percent.

Hogan Gidley, 2020 national press secretary of Trump, states that they are looking forward to several freedom-loving patriots to join the rally and celebrate America, the greatest republic in the world’s history.

Former Brigadier General Don Bolduc, a Republican running for United States Senate in the state, also reveals his plans to attend the event of Trump while keeping in mind the social distancing along with the proper safety precautions with everyone else there.

Further, he adds that the country still needs the economy to move forward, and leaders need to get out in public and assume the risk. In this way, leaders may convey their message to their people to keep the country on the road to progress.

Ray Bickley, New Hampshire Democratic Party Chair, states that the President is flying in for an election rally that will only fortify the chaos. The response of Trump to the coronavirus crisis is chaotic and sadly insufficient, resulting in a huge number of Granite Staters contracting to COVID-19, and it will be responsible for hundreds of lives lost while causing consequential damage to the economy of the country.

News of the rally comes as Trump continues to steer consequence from his in-person rally in Tulsa, Oklahoma, in June, where several Secret Service agents and campaign staffers contracted with the novel coronavirus. Less than sixty-two hundred people attended the rally that meant to signal the return of the president to the reelection campaign trail. The less crowed in the rally blamed on the strong reaction from the radical protestors and media about assembling such a large crowd during the deadly pandemic.

The president long watched gatherings as an outlet where he may interact with his supporters in a way that he cannot connect while he is in Washington, DC. He held responsible bad poll numbers on his nonattendance from the campaign trail.

Whereas, the former adviser to the White House medical team during the presidency of George W. Bush, Dr. Jonathan Reiner, says that Trump is obviously flirting with the pandemic crisis by holding rallies and attending the mass event without wearing a face mask. Because of the weight and age of Trump, he possibly has close to twenty percent chance of dying if he contracts the virus.