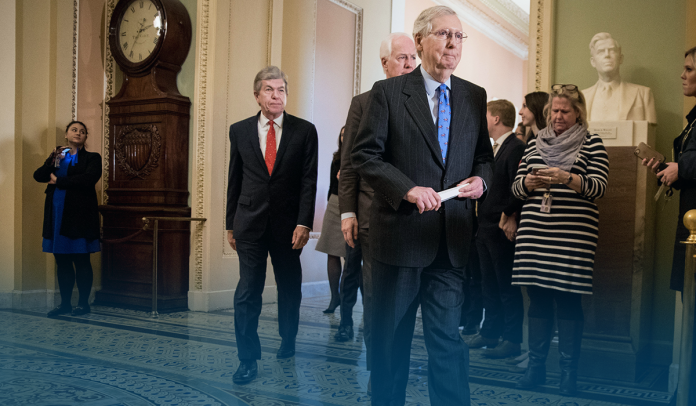 On Thursday, the United States Senate passed stopgap legislation to provide money to the U.S. government to run federal departments and agencies, in an effort to avoid a partial shutdown. The measure would also offer USD 12.3 Bn in assistance to Kyiv, as the current American government pledges to maintain economic aid for Ukraine to fight off Russian barbarity effectively.

The temporary government funding bill, approved by a 72/25 Senate vote on September 29, is likely to be passed by the U.S. House before sending the bill to the White House to be signed by President Biden. The legislation would fund the government through 16 December, as the US governing body moved to avert a partial shutdown at midnight on September 30, before the Fiscal Year 2021 ends. The United States Federal Budget for FY-2021 ran from 1st October 2020 to 30th September 2021.

The legislation, also known as the continuing resolution (CR), which now moves to the U.S. House of Representatives and is anticipated to pass quickly, also contains USD 12 bn in Ukraine aid, USD 1 bn in household energy support, and emergency assistance in case of the occurrence of natural hazards. In addition, under the CR, the Senate reauthorized FDA user fee programs for another 5 years, from 2023-2027.

Furthermore, the legislature approves the delivery of USD 3.7 bn in US arms and equipment to war-torn Ukraine. That would be the newest in a string of extensive aid packages that US lawmakers express intend to boost Ukraine’s capabilities to strongly resist Moscow’s violence.

Another $35M for Nuclear Incident Aid

Congresswoman Rosa L. DeLauro, Chair of the House Appropriations Committee, told the media that they aren’t going to shut the government operation, adding that she is hopeful that they’re going to approve the legislation.

U.S. Sen. Joe Manchin (D-WV) said he supported the temporary federal budget extension through 16 December 2022 to keep the government running during these crucial times. He also said that it’s unfortunate that US Senators are letting politics to put the energy security of the U.S. at risk.

Due to the reports of the Moscow military threatening the safety and security of the country’s nuclear power facilities and Vladimir Putin, the President of Russia, saying Russia might use nuclear arms to defend his country against Ukraine, the bill would also appropriate thirty-five million dollars to make themselves ready beforehand for the potential nuclear emergency in Ukraine, Europe. In May, the United States Congress authorized forty billion dollars in aid for Kyiv, and earlier in 2022, the Congress approved 13.6 bn dollars for Ukraine to fight against Russian incursion.

Read Also: US to Provide Additional $1.1bn in Security Aid to Ukraine