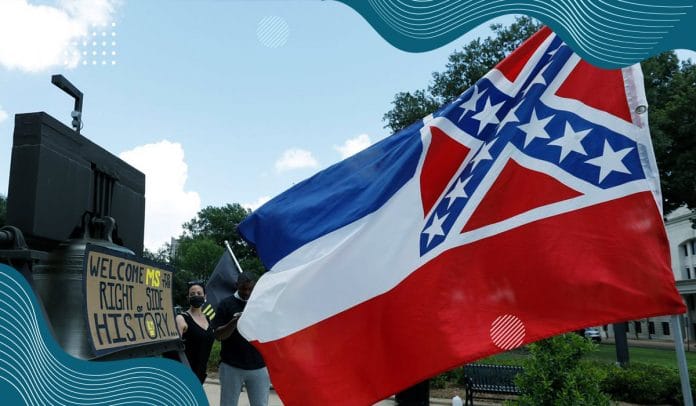 On Sunday, the Mississippi state legislature of the United States approved a bill to remove the Confederate symbol from the state’s flag in a historic poll on the last remaining state flag to feature the Confederate emblem. The bill will now go to Tate Reeves, the Republican Governor of Mississippi, who already said he would sign the bill into law.

The bill establishes a commission to develop a new flag design without the Confederate emblem that includes the phrase “In God, We Trust.” Mississippi state voters would then vote on the new design this November. https://t.co/6OyzBDZAMU

The legislation cleared the state House with a 91-23 vote and passed from the Senate with 37-14 votes. It comes as Mississippi representatives considering a change to their flag for some weeks amid current racial justice protests all over the country.

Initially, the flag of Mississippi adopted in 1894 with blue, white, and red stripes with the Confederate battle symbol in the left upper corner. The passed bill creates a commission to design and develop a new flag without the Confederate symbol that includes the slogan “In God, We Trust.” Voters of Mississippi state would then vote on the innovative design this November.

Democratic State Representative Jeramey Anderson from Moss Point highly praised its passage on Sunday as a historic moment. On his official Twitter account, he thanks those who came before them, who resolve nurtured the Civil Rights Movement that helped them to bring this day. He cheered with words – a beautiful moment of unity.

I thank my colleagues, constituents and the activists who fought so hard to bring about this historic moment. I thank those who came before us, who with courage and resolve nurtured the Civil Rights Movement that helped bring us to this day. What a beautiful moment of unity.

Another Democratic state Representative Zakiya Summers echoed the same message on Twitter that she just through the deuces to the state flag. Derrick Johnson, the president of the National Association for the Advancement of Colored People (NAACP), told CNN’s Wolf Blitzer on Sunday evening, it comes after a long time. He said, finally, Mississippi decided to be one of the fifty states rather than one state standing alone, still bearing the symbol of a separated society.

I just through the deuces to the state flag that’s at the entrance of the house chamber! ✌🏾#ByeFelicia

The flag of the Confederacy stated as the statues and symbols honoring Confederate leaders long divided the United States. Whereas, the critics call the flag as a symbol that represents the war to support slavery, whereas supporters call it a symbol of Southern heritage and pride. These symbols progressively become a uniting call for white supremacists.

In the last few weeks, the death of black George Floyd under police custody led the removal – by protestors in some cases, whereas city leaders in others – of contentious statues that upset some nationals for decades, if not longer.