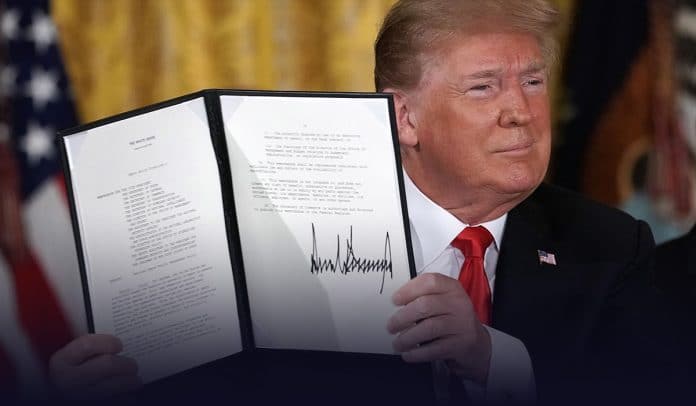 I just had the privilege of signing a very strong Executive Order protecting American Monuments, Memorials, and Statues – and combatting recent Criminal Violence. Long prison terms for these lawless acts against our Great Country!

The order from the president enforces laws prohibiting the violation of public monuments, the destruction of government property, recent acts of violence from protestors and suppresses federal support tied to public areas from local & state governments that failed to protect national monuments as well as pull out federal grants for law enforcement agencies and jurisdictions that fail to stop their desecration. Furthermore, the order also provides assistance to protect the federal statutes.

On Friday evening, Bill Barr, the Attorney General, ordered to create a task force to counter anti-government activists, especially naming those who support the boogaloo movement and also those who recognize as Antifa.  The FBI, the United States Attorney for the District of New Jersey, Craig Carpenito, and United States Attorney for the district of Northern Texas, Erin Nealy Cox, and other relevant departments will head the task force. According to a memo of the internal Justice Department, the group will share information with state and local law enforcement and train them to identify anti-government extremists.

Trump has been altering his order related to memorials during the whole week, as historical statues and monuments become the targets of damage and anger during the protests #BlackLivesMatter in the wake of George Floyd’s death in police custody at the May end. The early statues under fire were Allied generals and soldiers mainly in the South because of the treatment of African-Americans. In addition, even more, top military officials called for the renaming of Army bases named after Confederate generals.

Since the anger spread to monuments of ex-presidents of the United States and thought to settlers, for example, Christopher Columbus, and even some others who struggled against slavery, protesters tried to pull down the Emancipation Statue of Abraham Lincoln in Lincoln Park on Friday night. The statue shows the sixteenth president of the U.S. holding the Emancipation Proclamation next to a kneeling handcuffed slave. Protesters say it doesn’t portray the role slaves played in securing their own freedom.

On Tuesday, Eleanor Holmes Norton, Washington, D.C.’s congressional representative, announced to introduce a House bill to remove the problematic statue. Last weekend the violent protesters defaced and tumbled a statue of Ulysses S. Grant, who directed the Union Army during the Civil War in the country. The same night, protestors also ripped down statues of Francis Scott Key and St. Junipero Serra, who wrote the lyrics to “The Star-Spangled Banner.”

McConnell listed all the monuments this week that the protestors defaced in recent days. It also mentioned a statue of first United States President George Washington that the protestors pulled down and burned the country’s flag over his head. According to McConnell, the protestors also defaced another Washington statue in Baltimore and the statue of Thomas Jefferson in Portland. They also targeted other statues at different locations.