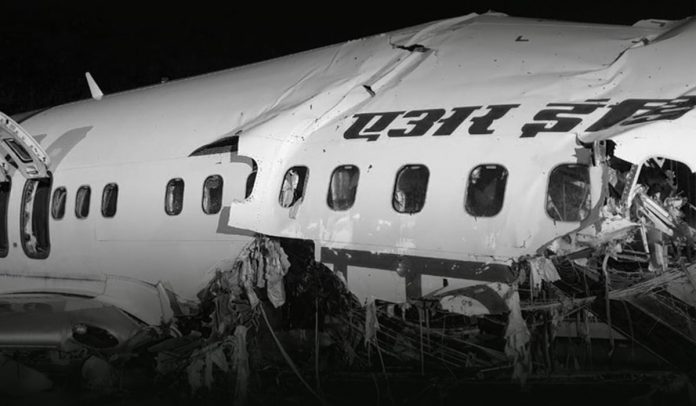 A plane of Air India Express crashed in Kerala, the South Indian state, after skidding off the runway while landing at the airport. Due to the mishap, the plane breaks into two parts, killing at least seventeen people and forty-six people injured seriously. The incident happened at Kozhikode Calicut International Airport. According to the Inspector General of CV Anand, Central Industrial Security Force, both pilots also got severe injuries.

At least 16 people died when an Air India Express plane crashed in southern India after skidding off the runway and breaking into two while landing at Kozhikode Calicut International Airport https://t.co/ZNQOFeKWk4

Hardeep Singh Puri, the Civil Aviation Minister, told CNN that flight IX-1344 overshot the runway due to rainy conditions and went down thirty-five feet into slope before collapsing into two pieces. According to Air India Express, the route of the flight was coming from Dubai to Kozhikode Airport. One hundred and ninety people were on board on the calamity flight.

There were two pilots, four crew members, 174 passengers and ten infants on board the plane — no fire reported at the time of aircraft landing. The airline states that the four crew members of the flight remained completely safe in the incident. The images from the accident scene showed a cracked fuselage with several small and large pieces of plane scattered across the field. Moreover, it also shows that people are searching for their friends and family members through the debris.

Is bad weather becomes the cause of the crash?

In a statement, Puri told CNN that because of the bad weather conditions, the pilot tried to land the aircraft earlier, but unfortunately, he did a turnaround. The plane would not stop by the end of the runway, and there is a thirty-five-foot drop in a gorge. He adds that luckily the aircraft didn’t catch fire.

Aircraft Accident Investigation Bureau (AAIB) will conduct a formal investigation into the crash, according to Puri. Later, on Twitter, he said that two professional investigation teams from Air India, AAIB, and Airports Authority of India would leave for Kozhikode early on Saturday. Anand said that the clearing of the aircraft ended after the last lady passenger pulled out of the debris at 11:10 p.m. IST.

Two investigation teams of professionals from @airindiain @AAI_Official & AAIB will leave for Kozhikode at 02.00 hrs & 05.00 hrs.

Everyone has now been rescued from the aircraft.

The aircraft was one of the exile flights by the government of India to bring back Indian citizens stranded abroad because of coronavirus travel restrictions, according to the information on the Air India website. The crash on Friday comes over a decade after an Air India aircraft overshot a runway in Mangalore, which crashed into a ravine and burst into flames resulting death of 158 people.

Pinarayi Vijayan, the Chief Minister of Kerala, called on fire and police officials on the scene to take quick action following crash news. He also told on Twitter that he directed these officials to make required arrangements for rescue and medical support.

Have instructed Police and Fire Force to take urgent action in the wake of the plane crash at the Kozhikode International airport (CCJ) in Karipur. Have also directed the officials to make necessary arrangements for rescue and medical support.

Both Indian Prime Minister Narendra Modi and Foreign Minister Jaishankar sent their sincere condolences to the victims and their families on Twitter. Modi wrote on Twitter that he felt pain after listening to the news of the plane crash. He shared his sympathies with the families of those who lost their loved ones. Also, he prayed speed recovery for the injured ones. According to the website, Air India Express is an exclusively owned subsidiary of Air India. It operates a twenty-five Boeing 737-800 NG plane.

Pained by the plane accident in Kozhikode. My thoughts are with those who lost their loved ones. May the injured recover at the earliest. Spoke to Kerala CM @vijayanpinarayi Ji regarding the situation. Authorities are at the spot, providing all assistance to the affected.