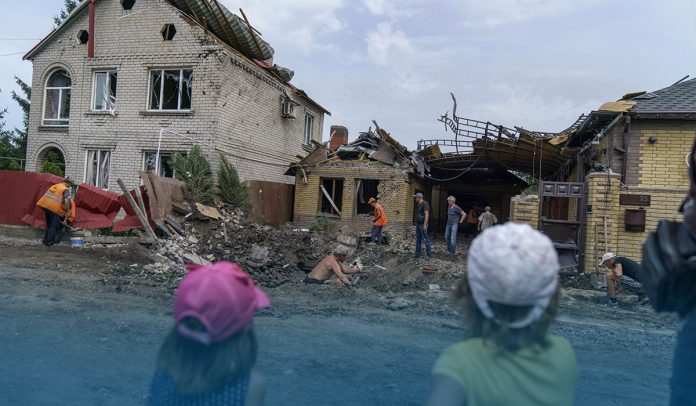 Ukrainian authorities said Russian Armed Forces heavily struck residential areas across war-torn Ukraine overnight, claiming captures, as the Armed Forces of Ukraine urged a counter-attack in an attempt to take back control of seized Ukrainian region, attacking the last working bridge over a Dnieper River in the important Black Seaport city of Kherson.

Oleksandr Goncharenko, Kramatorsk Mayor, said that a missile attack Friday night by Russian forces on Kramatorsk city in the northern Donetsk Oblast took the lives of at least three people and injured thirteen others. Kramatorsk is the headquarters for the Armed Forces of Ukraine in the country’s East.

According to media reports, the rocket attack came less than a day after eleven other missiles were launched on the city, one of the two major Kyiv-held ones in eastern Donetsk, the focus of a continuing Moscow’s brutal invasion to gain the east Ukrainian region of Donbass, a historical and economic region.

Previously on Saturday, Russia’s Ministry of Defence asserted that its military personnel had seized control of Pisky, a village in Pokrovsk Raion in eastern Donetsk, at nearly 6.2 miles NW from Donetsk and almost 1.25 miles of Donetsk airfield’s western boundary. And pro-Moscow forces had reported that they’d completely seized Pisky over a week ago, according to Russian state-owned news agency TASS.

And Ukrainian officials didn’t acknowledge any military losses but said rocket attacks by Moscow forces on August 12 had devastated twenty residential departments. None of the assertions could be autonomously confirmed.

The potential risk of catastrophe at Ukraine’s Zaporizhzhya nuclear power station controlled by Moscow forces is swelling day by day, according to the city mayor, Dmitri Orlov. The atomic facility, which is the largest in Europe, was captured by Putin’s Armed Forces in the early days of the Ukrainian incursion. Last week the Zaporizhzhia NPP came under intense assessment frequently, with officials from both sides trading accusations from the risky escalation.