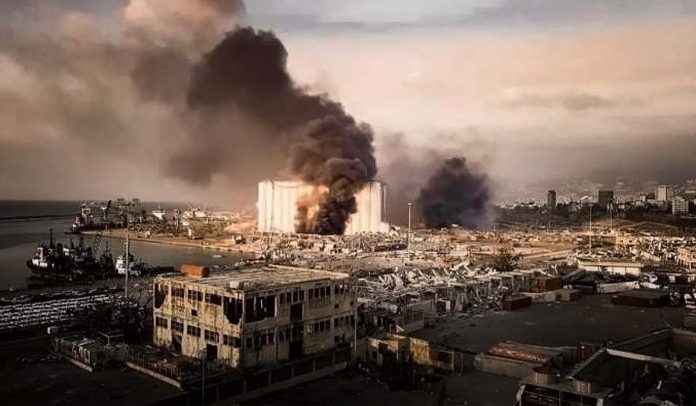 On Wednesday, Lebanon officials declared Beirut as a ‘disaster city’ after the massive explosion in the port that left a minimum of 140 people dead and over five thousand injured. The death numbers expected to climb amid the ongoing search and rescue operation. Several people are still missing one day after the Tuesday blast, and over three lac people became homeless. The emergency services of the Lebanese capital undergo under huge stress because the explosion damaged four hospitals treating coronavirus patients.

A warehouse storing thousands of tons of unsecured highly explosive material has emerged as a possible source of the massive blast that ripped through the Lebanese capital, killing at least 78 people, injuring 4,000 and sending a shock wave across the city https://t.co/zisfNEOCe5

The shock-wave of the explosion damaged buildings in the area of ten kilometers or, in other words, six miles away. According to some initial investigation, a warehouse at port storing thousands of tons of explosive and unsecured chemical compounds emerged as a possible cause of the blast. Still, it is unclear what led to the blast that wiped out whole streets. However, questions surged on Wednesday over whether the officials failed to act on warnings signs.

Hassan Diab, the Prime Minister of Lebanon, said that about 2,750 metric tons of ammonium nitrate – usually used as an agriculture fertilizer stored at a warehouse for six years in the Beirut port lacking safety measures which unfortunately took the lives of several citizens. Initial reports in Lebanese national media blamed the blast on a big fire at a firecracker warehouse near the seaport.

Lebanon’s Prime Minister Hassan Diab said that 2,750 metric tons of ammonium nitrate, which is typically used as an agricultural fertilizer, had been stored for six years at a port warehouse without safety measures https://t.co/K7TP1KGXSJ

However, the prime minister’s account was backed up by Abbas Ibrahim, the general security chief of Lebanon, who said that a highly explosive material confiscated the last few years earlier and stored in the warehouse, just a few minutes’ walk from shopping and nightlife districts of Beirut. Hassan Kraytem, the Director-General of Beirut Port, said on Wednesday that he knew the nature of the materials stored in warehouse number twelve as dangerous, but not to that extent.

According to Kraytem, the authorities conduct the maintenance on 12’s door hours of Warehouse before the blast on Tuesday. State and Customs Security sent letters to officials asking to take away or re-export the explosive materials six years ago. Kraytem says that since then, they have been waiting for this problem to resolve, but to no avail. CNN got the documents and maritime traffic services that describe a shipment of about 2,750 metric tons of ammonium nitrate stored in 2013 in Beirut on its way to Mozambique.

Badri Daher, the Director of Lebanese Customs, told CNN that authorities previously requested to legal authorities six times in written form to remove that cargo from the port, but the officials didn’t take any notice on the request. Michel Aoun, the President of Lebanon, promised to carry out a transparent investigation into the causes of the deadly explosion, vowing on Wednesday that those responsible people would be held accountable and face severe punishment.

According to Ghada Shreim, the minister for displaced people, the Lebanon cabinet officially ordered to house arrest the port authorities in the coming days, until the results of the investigation. However, people in the country and across the world are demanding an international inquiry into the blast. Former Lebanese Prime Ministers such as Fouad Siniora, Tammam Salam, Najib Mikati, and Saad Hariri find it compulsory to ask the Arab League or the United Nations (UN) to form an Arab or international investigation committee, according to a mutual statement released from Hariri’s office.

Siniora: We call on the UN or the Arab League to form an international or Arab investigation committee of judges and investigators with integrity, professionalism, and impartiality to start their duties in uncovering the circumstances and reasons for what happened in #Beirut

It demanded the committee composed of professional investigators and judges that start their duties impartially in finding the circumstances and reasons for the disaster that occurred in Beirut. Rights group Amnesty International (AI) also demanded founding an international mechanism to investigate the misfortune incident yesterday. As four million residents of Beirut struggle to come to terms on Wednesday with the horror and scale of damage to their lives, livelihoods, city, questioned arose about why such an immense quantity of dangerous chemicals allowed to store in the middle of the city without suitable safety measures.

The blast also comes at a difficult time for Lebanon, which started ravaged by political and economic chaos exacerbated by the fallout from the coronavirus outbreak. According to Johns Hopkins University data, Lebanon only confirmed five thousand and sixty-two COVID-19 cases and sixty-five related deaths. Violent protests erupted over rising poverty and hunger, which soared to more than fifty percent, and scenes of people searching garbage dumps for basic needs become commonplace.

Power outages are common in Beirut, compounding weights on basic services for the injured. The explosion of Tuesday in Beirut resulted in projected the US three to five billion dollars’ worth of damage, according to Marwan Abboud, the governor of Beirut. Prime Minister launched an investigation into the explosion. He says that he will not rest until they find the responsible people for the happening, and impose maximum punishment to them.

Anthony May, the former ATF explosives investigator for the United States government, says that the dark or bright red cloud appearing in videos of the blast is not reliable with ammonium nitrate. The revealing sign of the compound might be a yellow smoke cloud and might some other items involve in the explosion. As far as the weight of the explosives concerned, the number of explosives and shock-waves after the huge blast would be equal to a kiloton nuclear bomb going off.