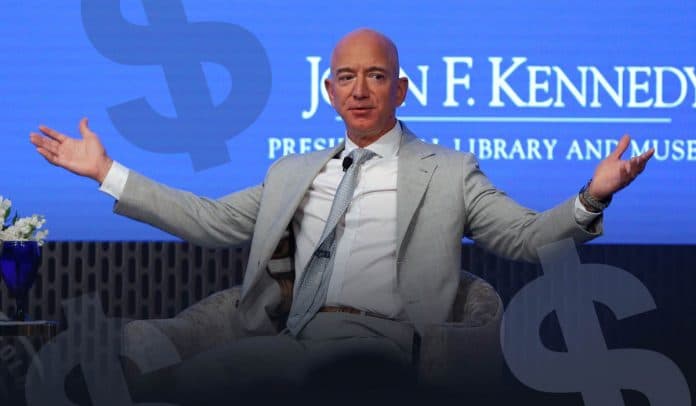 Jeff Bezos, the CEO of Amazon, was already the richest man in the world. At present, his net worth rose steeply once again, setting another new record. According to the index of Bloomberg Billionaires, the wealth of CEO reached around $202 billion on Wednesday, as the shares of the company soared. That is up about $87 billion since January.

The rapid growth in Bezos’s fortune drove due to his holdings in Amazon. The stock of Amazon is up around twenty-five percent during the last three months and eighty-six percent so far this year, according to the statistics from Refinitiv. After founding the company in 1994, Bezos keeps breaking records with his wealth. He became the richest person in the world in 2017.

IT’S GOOD TO BE JEFF BEZOS: Already the world’s wealthiest man, Amazon CEO Jeff Bezos’ net worth is an estimated $202 billion; up about $87 billion since January. https://t.co/VEgvXw3GU4

Tech tycoons getting wealthier during the pandemic

Last month, his projected net worth soared to about $172 billion, marking a new worldwide high. He is not the only billionaire – other technology tycoons are also getting much wealthier during the coronavirus pandemic as demand for the goods and services of the companies continue to grow.

Earlier this month, Mark Zuckerberg, the CEO of Facebook, labeled as a centimillionaire as his wealth exceeded $100 billion. Similarly, Elon Musk, the CEO of Tesla, is also close to achieving that extraordinary milestone with a net worth of $96 billion. Bill Gates, the founder of Microsoft, already achieves that status.

Likewise, Tim Cook, the CEO of Apple, also became a billionaire recently as shares of his firm, now became the world’s most valuable, as they soared. Cook stands as a rare example of an executive who did not found their firm breaking into the super-rich levels.

However, Amazon is the biggest asset of Bezos, and it is not the single brand he runs. Bezos is also the owner of Blue Origin, the space travel firm. He founded the company in 2000. Similarly, he also owns the Washington Post newspaper, which he attained in 2013.

Jeff Bezos and his ex-wife MacKenzie Scott (formerly MacKenzie Bezos) announced their divorce last year. The divorce granted MacKenzie a quarter of the couples of the shares of Amazon, associating to a four percent stake in the company.

A few months later, she signed the Giving Pledge; an initiative began by Bill and Melinda Gates and Warren Buffett to encourage the richest people of the world to donate the bulk of their wealth to charity. According to the Bloomberg data, Scott is worth over $65 billion, making her the world’s thirteenth richest person.